Living a Catholic Life in the Modern World

Tell me this isn’t so — Strawberry shortcake is getting “sexed-up”.  Over at Woman Honor Thyself Angel puts her special touch to the story (do read it the pictures alone are worth the click), personally I don’t know if I should laugh or cry.

Why not go all the way and put all little childrens’ dolls in halter tops and short shorts while wer’e at it eh?She musn’t have freckles, or be pudgy. Uh uh. Her figure must be svelte and her skin- silky smooth.
Tighter clothes, longer hair, and of course……….. a smaller nose.
Every single female, no matter how young or what she represents- must be sexualized.

Replacing her pet cat with a cell phone? Now, that’s priceless.
After all what good is a purely innocent “childlike” figure anyway?
So, where’s her bare midriff shirt and belly ring?..Or do those accessories cost extra?

I have written over and over about how difficult it is to raise a daughter to be modest and innocent in today’s world.  I am not even talking about my teenager.  Even shopping for clothing for my six year old requires bringing the mental eye-bleach along to deal with the “Please molest my seven year old” clothing selection.   And it isn’t as though the secular world isn’t catching on. 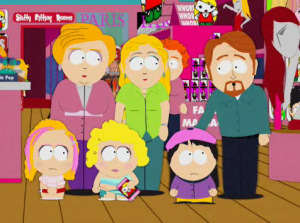 “Popular?…but these are our girls!”

Normally I am not a big fan of South Park,  but I saw this segment over on Hot Air and I think it says a lot about the popular culture when even the popular culture is picking up on the fact that there should be something really wrong with the way young girls are marketed to. (content warning: this is South Park the language is pretty offensive and please don’t click on it if your kids are around) The spot is also very insightful when it comes to the reasons parents fall into purchasing things for their daughters that they wouldn’t normally.   Peer pressure overrules common sense.

Quick run down for those who don’t want to watch it.  (Content warning here too)

A new store has opened in the mall and little Wendy is disturbed.  She goes to her parents and tells them that she is concerned about “the role models young women have in today’s society”  and that “Lewdness and shallowness are being exalted while intellectualism is looked down upon”.   Her father is unmoved until Wendy declares that she is going to go buy herself a thong.  At this point Mr Testaburger takes Wendy to the mall to protest the  new store called “Stupid, spoiled whore”.   When he gets there he is confronted by the other mothers who offer their excuses for buying the store’s merchandise.  “It’s the trend, she will be unpopular if I don’t”,  “Why is it ok for men to be whores but not women?”, “I think it is empowering for them.”  At the end the mothers and slutty store girls convince Mr Testaburger of his chauvinist ways and he vows to buy Wendy whatever she wants so she can be the “Most spoiled, stupidest whore of them all.”

The sad thing is I have heard these sort of lame excuses from parents I know.  They buy whatever is “in” so their daughters can be popular.  They give in to their girl’s manipulations to have the latest thing.  They feel that somehow if their daughters are liberated and confident in their sexuality that this will make them stronger and more independent women.   I have even been told that since I shelter my children and don’t allow them to partake in all the pop culture trends that as teens they are destined to explode in uncontrolled rebellion and hate me for making them “different”.  So far we are still waiting for our teenage daughter to become the hateful,  rebellious teen…. *tick, tick tick*,  any day now I am sure.

What is the point of making Strawberry Shortcake thinner, with no freckles, bigger eyes, longer hair – more sensual?  Why get rid of her kitty and give her a cell phone?  To make money obviously.   Make her more “up to date”, something that young girls will be more drawn to and sadly parents will buy it, girls will play with the dolls, want the toy cell phone, the pajamas and the t-shirts.   If parents didn’t buy them stores wouldn’t stock them.  It isn’t just some soul-less, moral-less corporation selling this crap to our kids parents have to take responsibility first for protecting their children from innocence shattering things.

While it may seem like a toy changing to a more “updated” look is trivial it is just one more drop in an overflowing bucket.  Nothing in an of itself, but as a cultural trend it is killing the self-esteem, self-image, innocence, happiness – not to mention endangering to morality of our daughters.  And the worst part is that we have gotten to the point where this is “no big deal”.  These girls who are going to grow up and be wives and mothers, and women you work with.   Do you really want them thinking that having the perfect figure and snazzy wardrobe are what they should be  judging themselves and other woman on?