So you might remember me in passing mentioning an interview I heard on NPR with director Brian De Palma about his then upcoming movie “Redacted”.  Now I would never in a million years watch this movie.  And it looks like no one else is watching it either.  Apparently a whopping 3000 people bothered to buy a ticket for it when it opened this weekend.  That is in fifteen theaters nation wide.   I really want this movie to bomb; that is what cause the momentary mirthful laugh.

The reviews are very mixed.  There are good reviews for the film they seem to all be from people with very slanted political opinions against the war.  They basically say “the movie sucks but it is really heart-felt and shocking so that makes it good.”  Most reviews go along the lines of “what a horrid mess of a film.”

We are in a war and horrible things are going to happen on both sides.  Some few of our soldiers will be responsible for atrocities and some will be committed against us.  While horrific and definitely worth looking at it is NOT the whole story.  Those soldiers who commit crimes should be prosecuted and they are.   If you want to look at our troops serving in Iraq as people with no moral sense, who are too naive and confused to know why they are there or what they are doing;  if you want to see our troops in the absolutely worse light possible (real or imagined) this might be the film for you.   But it doesn’t seem like too many people are interested.

And I think that is how it should be.  I think what most anti-war filmmakers are missing is a very simple fact.  The American public knows the US soldier.  He is that nice boy who lives across the street, that fellow in my WoW guild with the two kids,  she is my friend from college,  my husband’s friend from the USMC who reuped to be there with “his guys”,  and my sister-in-law the single mom with the two very young kids staying with their grandparents.  These are people we know and love.  We don’t want to watch this sort of thing.  Not yet, not now, not when each night our prayers include “please protect ____ while she is in Iraq, her little ones need her home.” 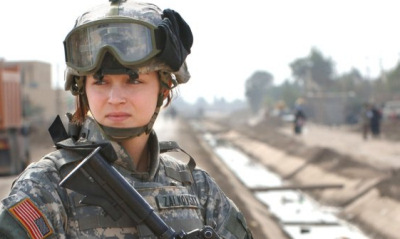 And yes, the US public by and large wants the troops HOME.  But that is a much different thing than being open to watching the absolute, animal,l dead-worst spin possible on what the US solider is doing.  No one wants to think someone they know could be the psycho who does these horrible things and no one wants to think their loved one is serving with someone like that either.  The place and time for movies like this will be about five years after the war  is done and all our loved ones are home and our hearts rest easy that they made it home safe and whole.

Just one more Catholic wife and mother on the internet, blogging about homeschooling, living the faith and all that sort of thing. View all posts by darcee

2 thoughts on “I shouldn’t laugh but I did.”